The Duchess is Afoot: the Promise of a Long Hot Summer: Part 1 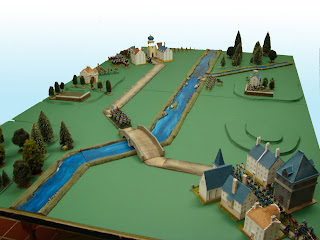 The stalwart men of the Konigreich were today again tested by the predations of the Duchess. Near the border village of Selchow an old stone bridge became a centerpiece of a desperate and heroic struggle. The garrison charged with defending the bridge and a ford upstream of the village were surprised today by a strong Grolsteiner attack. Fortunately, Colonel Gerlach's Jagers were posted along the river near the upper ford and spotted the moving columns of the enemy in the dawn mist. A howitzer attached to the Colonel's unit made good their oft heard boast that they had "never wasted a shell", by lobbing several well placed shots into the masses of Grolstein cavalry massing around the village of Grosse Kirchbaum....and the battle was joined... 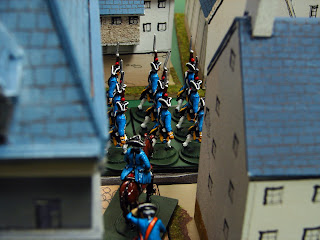 Bleiherzen infantry hurries down the main street of Selchow to reach the critical bridge. 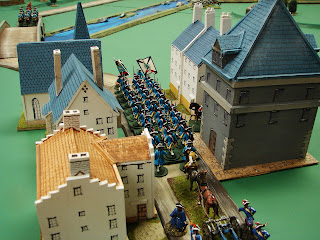 Bleiherzen infantry and a gun following march through Selchow to reach the bridge beyond...in the far distance Colonel Graf's dragoons patrol across the river... 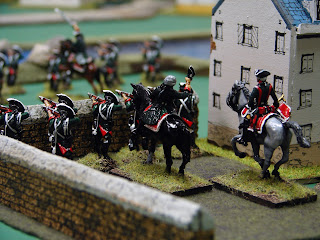 Colonel Gerlach's jagers position in the village of Neu Lagow and in the distance more of the Jagers at the ford... 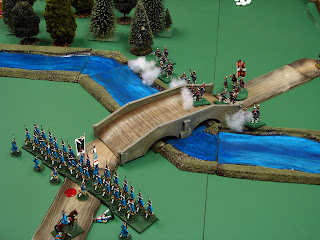 Action at the bridge when French mercenary light infantry skirmish against Bleiherzen line infantry causing some casualties among the officers... 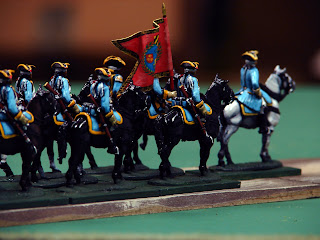 the Konigswald Dragoons led by their valiant Colonel Joseph Graf patrol across the bridge though they are technically in Grolstein territory, their morning patrol normally encounters light Grolstein pickets, but today they are surprised to encounter a regiment of Grolsteiner cuirassiers!... 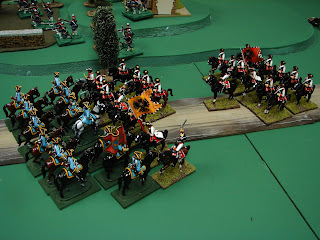 and though outnumbered, they bravely charge home and repulse the first squadron of the enemy, but cannot prevail against the numbers of the following squadron of cuirassiers....
Posted by littlejohn at 6:20 PM 9 comments:

Get Me the Heads of Those SPIES! 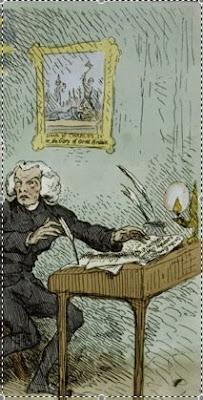 Ministers in the palace suspect Grolstein spies are afoot. The king has been unable to post replies to comments on his previous message... a troop of dragoons have been dispatched to search suspected houses in the capitol.

(the reply to kind comments and inquiries on last post:
The figures are RSM Prussian hussars in mirliton with some modifications for standard bearers and officers. I might also add plumes to the officers.)
Posted by littlejohn at 4:49 AM 1 comment: 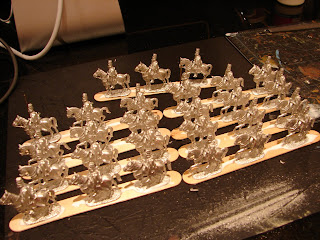 Spotted in training near Hohenfelde in the western reaches of the Konigreich, a new regiment of hussars. These fellows have already established a reputation with the locals in the area as a hard drinking outfit and hopefully when their training is complete a hard fighting one as well. Rumors as to new black hussar uniforms are circulating. The regiment is recruiting on a two squadrons of 24 troopers each and three additional officers establishment making them capable of splitting the squadrons for special duties or operation as a large host of light cavalry if necessary. They are being raised to counter a reported new mercenary unit of lance armed Pandours hired by the Grand Duchess of Grolstein.
Posted by littlejohn at 6:43 PM 3 comments: 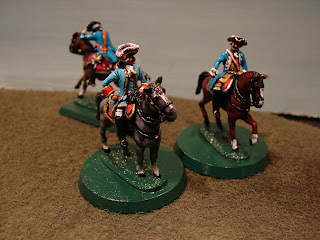 A sense of urgency surrounds this command party seen recently riding the outlying defenses of Schwiebus, the capitol of Bleiherzen. Seen at left, the Commander in Chief, Armee of Bleiherzen, Reichsmarshall Hergard Reinhold von Konigswald, 56 years old; to his right his most trusted Aide de Camp, Major Hans Messner, 41 years old; an administrative genius, who often exhibits spectacular logistical brilliance ....he is credited with the saying, "In war, it is most important to arrive on the field with many, well fed, enthusiastic men to ensure the greatest success..." in the background is the Reichsmarshall's young ADC, Manfred Reinhold von Konigswald riding hard away to deliver a message. Manfred is the Reichmarshall's grandson a mere 17yrs old... enthusiatic but yet to be tested in the fire of battle.

(the CinC figure is an RSM general with a few added details (cuffs and hat trim sculpted with greenstuff) to achieve a more "regal" feel to the CinC.)
Posted by littlejohn at 4:45 PM 6 comments: 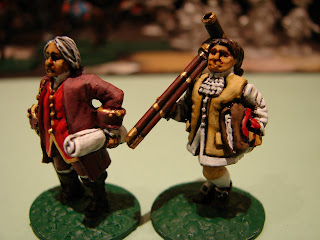 The Compté Du Gas and his assistant Jean set out to survey a new line of defenses around the Bleiherzen capitol of Schwibus.

Figures are 25/28mm Blue Moon civilians converted with "green stuff"...the surveying transit instrument that Jean is carrying is scratch-built from brass wire and tube.
Posted by littlejohn at 10:33 PM 6 comments:

The Burden of Command 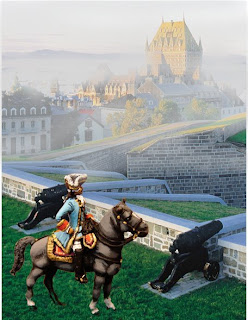 Supreme Commanding General of the Armee of the Kongreich der Bleiherzen, Hergärd Reinhold von Konigswald, surveys the defenses of the Bleiherzen capitol of Schwibus at dawn.... he contemplates the Duchess of Grolstein's next move...she certainly grows stronger and perhaps is gaining allies from the south and certainly she has the ear of the Turks....the fate of Bleiherzen seems in his hands. There is much to think about...and Frederick needs his horseflesh....
Posted by littlejohn at 8:14 PM 1 comment: 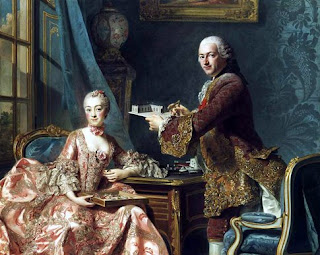 Comté Michel Du Gas, Military Cartographer and Visiting Minister of War and Culture, to the Court of the Königreich der Bleiherzen.

Seen here at work on one of his many miniature buildings...a fascinating, if somewhat odd, enthusiasm...a diversion from his theoretical work on war, fortifications and military theory. He is rumored to have a younger brother, a certain Colonel Chassé Du Gas, also rumored to be involved with Irish intrigues of late and possibly having raised a new Freicorps of Aquebussiers in Ireland...said to be pledged to the Konigreich, (... the Du Gas family being noted for their unusual ability with the musket). On the left his mistress Gene´ his most familiar and patient companion, a notable lady of the French court (...but of Italian descent...her family springs from the Dukes of Milan...a serious complication since Maria Teresa of Austria rules Milan and thus holds some considerable power over Gene´s family in Italy.) Comté Michel's service to Bleiherzen has caused discord amongst family in both Italy and France. But as Michel is often heard breezily to say, "Ce n'est aucune affaire...un autre verre !"...(It's no big deal...another glass!)

The Comté, though a talented miitary engineer and architect , has been known to have been involved in complicated court intrigues in Paris, his arrival in the Konigreich is rumored to correspond with a particularly delicate situation involving yet another young lady of the French court who could not be trusted to keep confidence, thus inspiring a certain urgent desire to travel on the part of Du Gas.

Based on letters of introduction from the King of France, King Wilhelm of Bleiherzen has entrusted the Comté with an important advisory position in the Bleiherzen court and he has entrusted his son the Erbprinze von Kluge to the care of the Comté as an advisor on affaires militaré.
Posted by littlejohn at 8:46 PM 4 comments:

littlejohn
By way of this blog I hope to explain my mad, life-long fascination with historical miniature wargaming, the worlds most noble hobby!